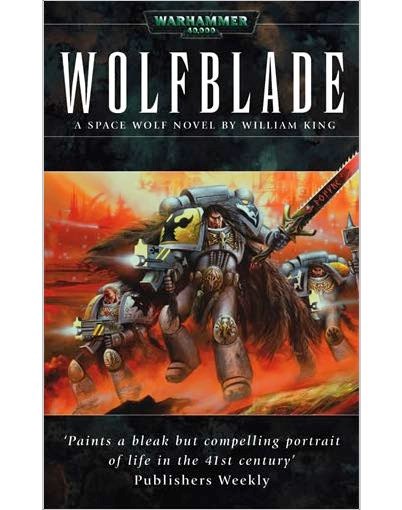 The ancient Navigator House of Belisarius has long been bound to the mighty Space Wolves as allies. In return for the means to navigate the treacherous warp, the Space Wolves provide an honour guard of elite warriors - the Wolfblade - to protect the House. When Ragnar takes up his duties on ancient Terra he soon becomes embroiled in an assassination plot that reaches into the very depths of Imperium! Unused to the delicate political machinations, Ragnar must resort to the howling fury of the Wolves if he is to save this noble dynasty and regain his honour!

All around the shrine was silent. In the mighty hall, banners of mourning flew at half mast. Ragnar wondered why he had been summoned to the chambers of the Great Wolf in the quiet watches of the night. It did not bode well. He was even less reassured when Berek and Sigrid emerged from the throne hall together.
Neither looked happy. Sigrid glared at him as they passed.
Berek looked melancholic. Neither spoke to him.
Moments later, Lars Helltongue, Grimnar’s stone-faced herald, beckoned Ragnar forward. He found himself in the long hall, which was covered in banners and trophies of ancient battles, under the eyes of the Great Wolf’s bodyguard. At the far end of the chamber sat the lord of all the Wolves, ensconced on his floating throne, with a scroll in his hands.
He looked up as the young Wolf entered and was beckoned to stand before his throne.
Ragnar knelt briefly and then rose, as a warrior does before his lord. Grimnar studied him, not unkindly, half amused,
half annoyed. Then he grinned.
‘Well, Ragnar Blackmane, you have set us a pretty problem, haven’t you?’ He gestured with the scroll. ‘You can speak freely here.’
Grimnar was obviously waiting for some response, so Ragnar spoke. ‘And what problem is that, Great Wolf?’
Grimnar laughed. ‘I would have thought it was explained with commendable clarity at the conclave today, pup.’
Ragnar was not stung by the address, as he would have been had it come from almost any other man. Grimnar was centuries
old, compared to him Ragnar was still but a child. ‘I would do what I did again, Great Wolf, under similar circumstances.’‘I am glad to hear it. Under the same circumstances I might have done what you did, Ragnar. On the other hand I might not. To take it upon yourself to use the weapon of Russ himself might be considered presumptuous. Some think you should be punished for doing so, others believe that it marks you for great things.’
‘What do you think, Great Wolf?’
‘I think you are a youth of great promise, Ragnar. Beyond that, I do not know. I do not wish to waste that promise, but at the same time you are a source of dissension among the Wolves. And at this moment in time we can afford no dissension. I fear that if I take no action against you, others might.’
Ragnar knew what he meant. Cold-blooded killings were rare among the Wolves, but other things could happen. In the heat of battle a stray bullet might find him. Comrades might be slow to come to his aid at a moment of deadly peril. Such things were never talked about, even though they happened.
And if he was thought to be a blasphemer, or a traitor, they might happen to him.
‘What would you have me do, Great Wolf?’
‘I would put you out of harm’s way, in a place where you might do some good.’
‘Exile, Great Wolf?’
‘That would be one way of looking at it. Tell me Ragnar, what do you know of the Wolfblades?’
Ragnar sifted through the memories that had been implanted by the training engines when he was an aspirant.
‘They are Space Wolves sent to Holy Terra to fulfil our treaty obligations with the House of Belisarius. We provide them
with bodyguards in return for the Navigators they provide us.’
‘That is true insofar as it goes, Ragnar, but Wolfblades are much more. They train the Celestarch of Belisarius’s House troops and lead them into battle. They act as his strong right arm when there is need. They slay his enemies in open battle and by stealth if need be.’