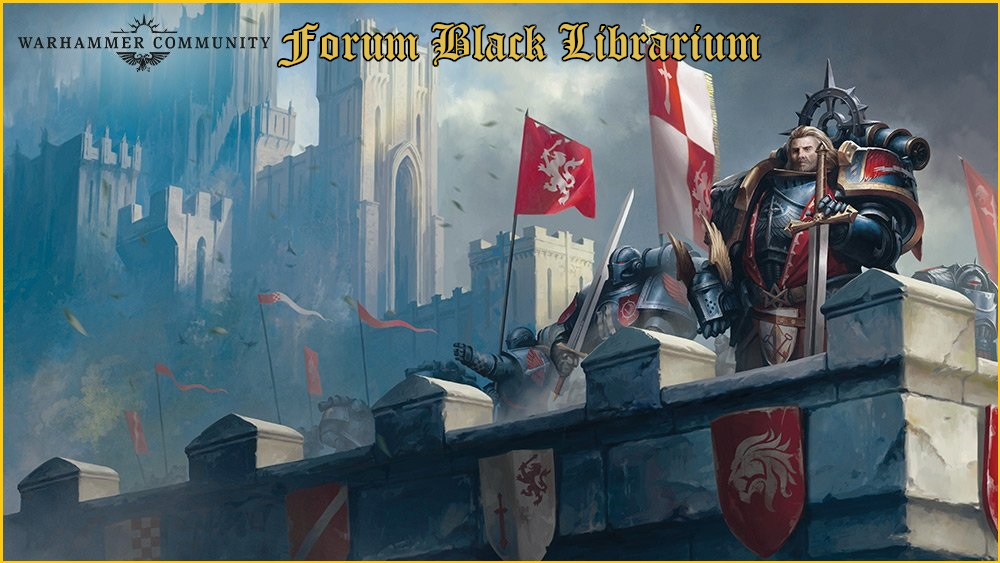 Chris Wraight takes control of the blog today, to tell us about his upcoming Space Marine Battles novel Wrath of Iron:

The Iron Hands. Few factions in the galaxy of Warhammer 40,000 create as much of an aura of dread and mystery as the half-bionic warriors of Medusa. They have none of the disciplined splendour of the Ultramarines, none of the flamboyance of the Space Wolves. Bred on a world of darkness, they adhere to an austere creed of absolutes. Their hatred of weakness is legendary – they will hunt it down remorselessly in their enemies, in their allies, and even in themselves. This maniacal pursuit of purity makes them utterly lethal. Few mortals of the Imperium welcome the news that the Iron Hands are heading their way – even a rumour of their impending arrival is enough to restore the slavish loyalty of restive populations. With the Iron Hands, you know what you’re getting: no mercy, no compromise, no half-measures.

Writing a book with such unattractive protagonists was a challenge. It was tempting to imagine that the Iron Hands, deep down, maybe aren’t quite as bad as their reputation suggests. But, in truth, they are. Their whole being is consumed by remorseless single-mindedness, a pathological loathing of everything but combat. They are a living embodiment of Warhammer 40,000’s dystopian setting, a dreadful warning of what ten thousand years of relentless war can do to the human spirit. And these are the good guys.

Wrath of Iron follows the actions of Clan Raukaan, one of the autonomous battle companies of the Chapter, during the brutal suppression of a revolt on the hive world of Shardenus. Almost nothing has been written about exactly how this Clan deploys in a warzone, so this was a chance to explore how Raukaan operates. We see their actions through the eyes of a variety of Imperium factions: a regiment of Harakoni drop-troops, an Imperial Guard tank division, a Titan battlegroup, and the luckless civilian population of Shardenus. As the conflict unfolds in the hellish, claustrophobic tunnels of the colossal hive spires, we begin to understand a little about why the Iron Hands are the way that they are. Their story is a tragic one, a tale of how noble aspirations have been slowly corrupted into madness, and how the loss of their primarch, millennia ago, has removed their last and only hope for redemption.

They have passed beyond such things. Emotion is corrupt; fear is irrelevant; flesh is weak - and when such things are purged, what remains is the Iron Hands.

Lord of the Night reviews the grimdark Wrath of Iron, the tenth novel in the Space Marines Battles series, by Chris Wraight.

“A brilliant and very grimdark debut for Wraight’s Iron Hands, the metal monsters of the Adeptus Astartes.” – The Founding Fields

The Iron Hands are not a chapter that have interested me, not when others like the Blood Angels and Black Templars exist out there. The lack of real appearances by the Sons of Manus pushed them to the back and what little was available was not enough to make me like them or want to know more about them. This novel changed one of those things.

Chaos has come to Shardenus. Its leaders have sold their souls to the Dark Prince for the promise of power and pleasures beyond mortal reckoning, and the ghastly handmaidens of Slaanesh now stalk the Capitolis as his influence affects all those who dwell within its walls. The Imperium’s might has landed outside its walls, the grinding engine of the Imperial Guard and the God-Machines of the Mechanicus. But the greatest force to walk in the ash-wastes are the Iron Hands, the sons of Ferrus Manus and of Medusa, who have come prepared to sacrifice everything to achieve victory, but not all the Imperials might share that sentiment.

The story of Wrath of Iron is a very cruel one. The outcome of the battle was known from the start but the story itself was brand new. The Iron Hands’s relentless advance, the tension with the Imperial Guard and Mechanicus, and the actions and lives of those caught inbetween two forces beyond their understanding were all explored, and were greatly entertaining. This novel pulls no punches with its death, cruelty and is a great image of how uncaring and harsh the Imperium can really be, and the Iron Hands provide a great many examples of just how much difference the Chapter sent to win a campaign can make on the entire war, and its aftermath.

A Daemon and an Iron Hand. Which one do you think is the true monster?

The characters are all widely varied. The Iron Hands of Clan Raukaan feature the Clan-Commander Arven Rauth whose weakness has been purged and what remains is only strength, the changing Brother-Sergeant Naim Morvox of Clave Arx who shows the dual-nature of the Iron Hands, and an insightful look into how they view the world in both stages of their lives, and Chief-Librarian Telach whose psyker nature and his nature as an Iron Hand create a very interesting character, unique amongst his cohorts. Other characters include Lord General Raji Nethata who does not appreciate the Iron Hands methods of war, Commissar-General Slavo Heriat whose devotion to Nethata is an interesting look into the bonds between officers, Valien an atoning Talica Death-Cultist seeking redemption for his past, and Alend Marivo and Shula Khadi whose adventure shows the greatest underclass of the Imperium, and how truly uncaring it can be.

The action scenes are brutal. Few other Chapters fight like the Iron Hands, who in turn fight more like automatons than flesh and blood warriors. Silent but sure advances through ranks of corrupted enemies, combined with the methodical killing methods of a chapter more machine than man make for very powerful scenes, and of course when the Servants of Slaanesh get involved the battles become far more visceral and with more even-odds. The Daemons present in the novel are much more powerful than in other books, with a Daemonette easily being able to match an Iron Hand for power, which I felt made those scenes more enjoyable as it showed how powerful Daemons really are, and made the battles much more costly to the Iron Hands which increased the theme of desperation in the battle.

The pacing is quite nice. Wrath of Iron contains twenty-three chapters and nicely spaces out the POV switches, and the book itself proceeds at a good speed but a quick one which is in keeping with the much re-stated need for a quick end to the assault in the story. The environments of Shardenus are fantastic, a great look at a Hive World from the top of its spires to the pits at its bottom, the pollution and wastelands that can be present even in a city, and the undergrounds of these cities that are oft-mentioned but rarely shown. The book also contains a link to another much-loved series, which I thought was brilliant and provoked a very interesting conversation between two characters that I look forward to discussing with others.

And now my favourite quote. I must admit I am torn between three quotes from the novel that really stuck with me, so I will go for one that I think is the most poignant and from an unexpected source.

“We are both sick Son of Ferrus, but only I know it.”

The ending is sad, necessary perhaps but that doesn’t stop it from being one of the cruellest and most depressing endings i’ve read in a while. Each character meets his or her fate, and while some do survive those who do not meet the harsh reality of sacrifice and life in the Imperium. Perhaps the Imperium does need monsters to defend it, but what does that say about the Imperium and the galaxy it resides in?

For a dark yet gripping story, a wide array of fascinating characters and powerful action scenes I give Wrath of Iron a score of 8.8/10. Some parts of the book felt a bit slow to me so I couldn’t give it a nine, but this is definitely one of Wraight’s better books and is the first real Iron Hands novel that shows them as they are, the unfeeling monsters that some see them as, and the scared men that others see them as. This book got me interested in the Iron Hands and makes me want to read more of them, but I do not like them.

Should you buy this novel? If you want more grimdark in your 40k novels then Hell Yes you should buy this book, its loaded to the brim with grimdark. Fans of the Iron Hands will definitely want to get this book, it sets them leagues apart from other Chapters and shows not only how they view the world around them, but perhaps how deep down they really view themselves.

That’s it for this review. Next i’ll be reading and reviewing the esteemed William King’s return to 40k with Angel of Fire. Until next time,

The Iron Hands: brutal, relentless, utterly merciless and the heroes (well, sort of) of Chris Wraight’s Wrath of Iron. While these fearsome warriors are the good guys in this story, they don’t always come across as such...

He went down hard, nearly blacking out as his helmet cracked against the floor. A hot trickle of blood ran down his temple as he pushed himself back up. For a moment, clouds of dust and bolter fire obscured what had happened, and he looked stupidly out through a cracked visor across the scene of desolation.

He saw two more monsters emerge from the swirling dust, firing their huge weapons steadily as they advanced. They picked off his men with silent efficiency. Some of the defending troops broke then, racing across the half-ruined chamber to get to the doors at the rear, but they didn’t get very far. Arela saw most of them torn clean in half as projectiles pumped clean through them before exploding like grenades.

He dragged himself to his feet again, his head light and his stomach churning. It had all happened so quickly. Dimly, he could hear the thunder of battle across the plains outside. Huge, grinding noises made the earth shake beneath him, and he could only guess at what kind of war engines had been landed.

One of the monsters turned from the slaughter to look in his direction. For a second, Arela stared right into its deathmask face. Two red eye-lenses stared back at him, glowing like twin embers in the smoke. The creature’s vox-grille – a downturned, contemptuous snarl of metal – glinted in the light of explosions going off.

Arela ran straight towards the monster. With nowhere to go and no chance of survival, he opted for one final act of defiance. As he ran, he fired his pistol and drew a rapier from the scabbard at his belt.

For all its bulk, the monster was fast – breathtakingly fast. Before Arela had taken another stride he found himself lifted up from the ground, clenched at the neck by a massive black gauntlet. He gasped for breath and his legs kicked out uselessly. His captor squeezed, and Arela dropped his blade. His vision blurred, and it was all he could do to look his killer in the eye.

‘I fight... for the Emperor,’ he gasped, blurting it out as if that fact could alter anything.

A metallic growl issued from the monster’s vox-grille.

‘You do not,’ it said, squeezing his neck and breaking his spine. ‘We do.’

Chilling stuff. It’s this machine-like efficiency and remorselessness that makes the Iron Hands unique amongst the Chapters of the Adeptus Astartes and such interesting characters to read about.

Wrath of Iron: An Extract 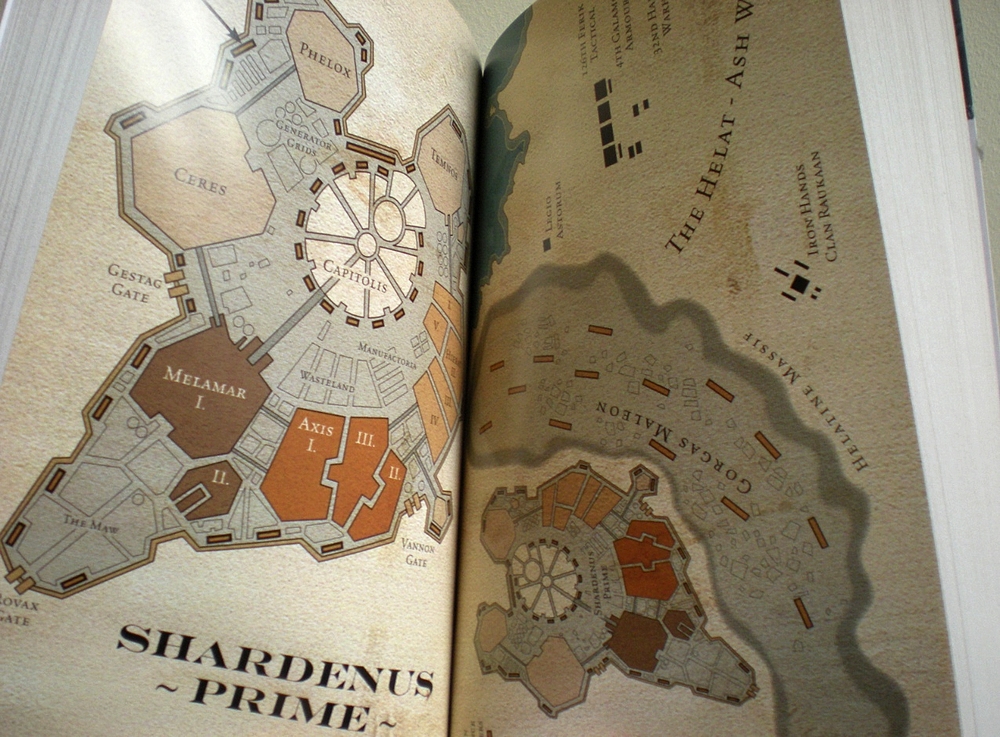