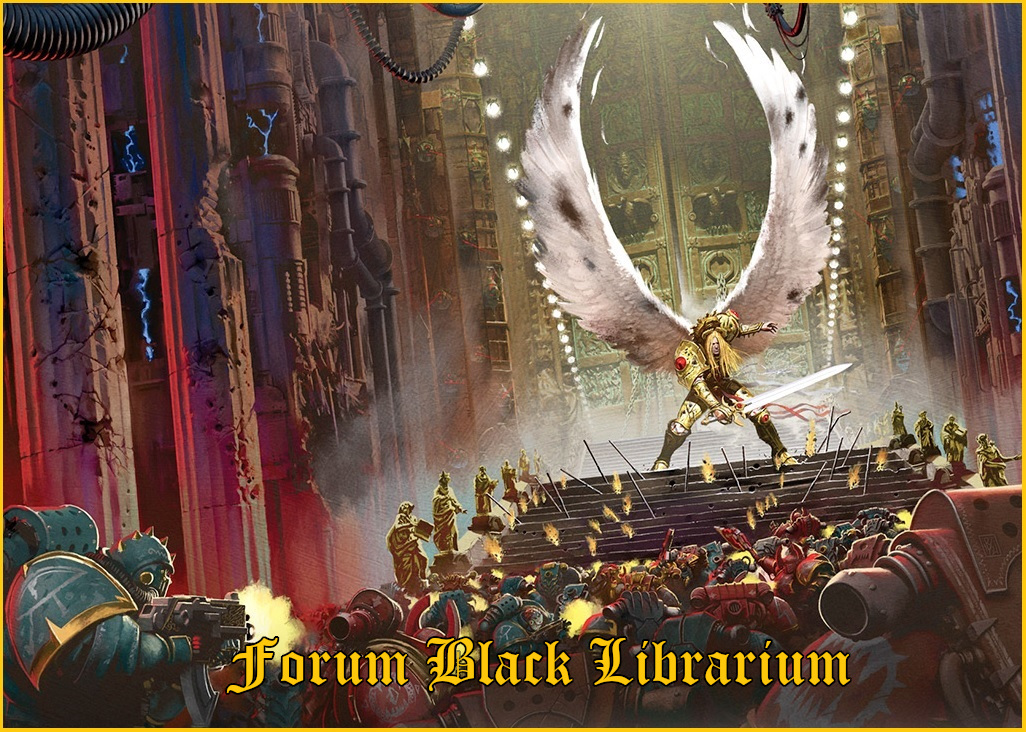 I've finished Know No Fear, so that's the main thing. There'll be more on that in future posts, but my new Horus Heresy novel (about the Battle of Calth, Word Bearers twatting Ultramarines, in case you were wondering) is done and finally dusted, much to the breathless relief of an increasingly panicking BL editorial staff. It was a monster to wrangle into words-in-the-correct-order form, but that's little excuse, as getting words in the order write is what I'm supposed to be able to do for a living. On the plus side, the actually in-house reaction to the book (ie: un-adjectivable projectile excitement) marginally outweighed the panic over the tardy delivery. I particularly enjoyed Laurie's Facebooked response where he said he had to get up and go for a little walk in the middle because he was getting too worked up.

Xmas (only the names have been changed) 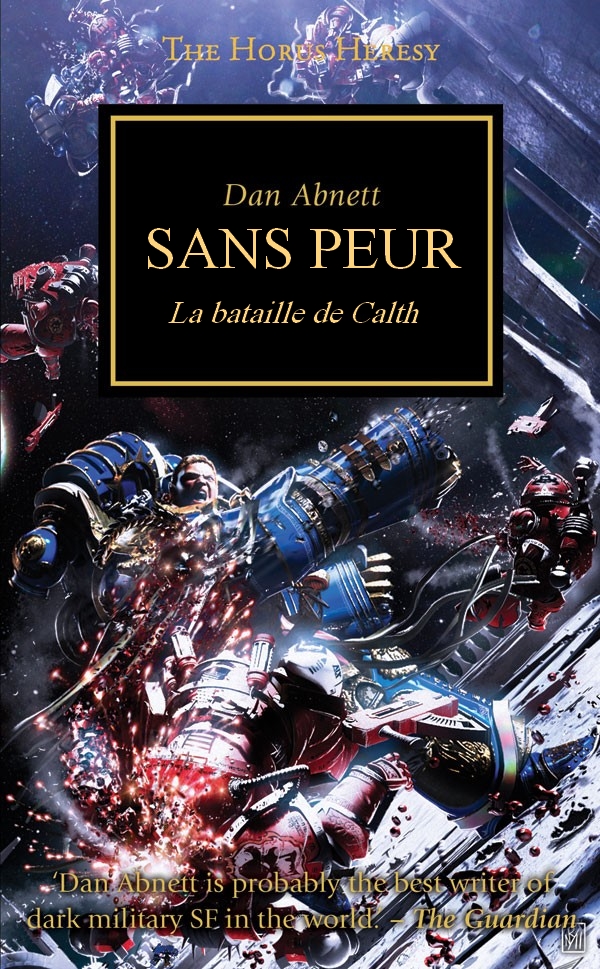 Guilliman steps onto the hololithic plate as it starts to come to life. The tiered stations of the flagship's bridge rise up around the vast plate like the stalls of an amphitheatre.

Light blooms around him.

Figures resolve, there but not there at all. Light has been captured, folded and twisted to give the illusion of reality. Guilliman knows that, somewhere, millions of kilometres away, other deck systems are fabricating images of him out of light. He is appearing as a hololithic presence on the lithocast decks of other stages, for the benefit of the august commanders whose ghosts are manifesting to him here.

The simulation is remarkable. Though luminous, there is true density and solidity to his flesh and his armour. There is no lag to his audio, no desynchronisation between mouth and sound.

'I did not expect to meet you like this,' Lorgar says. His grey eyes are bright. 'In person, so I could embrace you. This seems premature. I was informed of your request. I have had no time to dress in ceremonial attire-'

'Brother,' says Guilliman. 'You see that I greet you in regular battleplate too. There will be time for personal greeting and full dress ceremony when you arrive. You are just a few hours out now?'

'Decelerating fast,' Lorgar replies. He looks at someone not caught inside the hololithic field of his bridge. 'The shipmaster says five hours.'

'We will meet together then, you and your commanders. Me and mine.' Guilliman looks at the warlords whose images have appeared around Lorgar's. They are all connecting from different ships. He'd forgotten the imposing bulk of Argel Tal. The lipless sneer of Foedral Fell. The predatory curiosity of Hol Beloth. The hunched gloom of Kor Phaeron. The lightless smile of Erebus.

'Some of you are already here,' Guilliman notes.

'We will meet shortly, then,' says Guilliman.

Erebus inclines his head, more an accepting bow of the head than a nod.

The light phantoms salute him.

'I've asked for this brief communication,' Guilliman says, 'to discuss a small technical matter. I do not wish it to mar our formal conjunction, nor do I wish it to create problems for your fleet during approach and dispersal.'

There's a stiffness to them, suddenly. Guilliman feels it, even though they are only present as handfuls of light. When they first appeared, he realises, they seemed like a pack of dogs, padding into the firelight, teeth bared in smiles that were also snarls, gleefully inquisitive. Now they seem like wild animals that he should never have brought so close to the hearth.

The Word Bearers have been fighting brutal, heathen wars of compliance in the ragged skirts of the Imperium. They've been fighting them dutifully and ferociously for decades, since that fateful day on Monarchia that changed the relationship between XIII and XVII forever. There is something coarsely barbaric about them. They have none of the praetorian nobility of Guilliman's men. They don't even evince the passionate devotion of their misguided days. They look sullen, world-weary, as though they have seen everything it is possible to see and are tired of it. They look hardened. They look as though all compassion and compunction have been drained out of them. They look like they would kill without provocation.

'A machine code problem,' Guilliman replies. 'The Mechanicum has advised me. There is a malicious scrapcode problem in the Calth datasphere. We're working to eradicate it. I wanted you to be aware of it, and to take steps accordingly.'

'That could have been summarised in a databurst, sir,' remarks Foedral Fell.

'A connected matter,' Guilliman says carefully, 'is that the source of the scrapcode remains unidentified. There is a strong possibility that it is a data artifact that has been inadvertently brought in from outside the Calth system.'

'From outside?' asks Lorgar.

There's a look in Lorgar's eyes that Guilliman hoped never to see again. It's hurt and it's anger, but it's also injured pride.

Lorgar raises his hand and draws it across his neck in a cut-throat gesture. It takes Guilliman a moment to realise that it's not a provocation, a curt insult.

The hololithic images of his officers and commanders freeze. Only Lorgar's remains live. He takes a step towards Guilliman.

'I have suspended their transmissions so we may speak plainly,' he says. 'Plainly and clearly. After all that has passed between us and our Legions, after all that has been toxic these last years, after all the effort to engineer this campaign as a reconciliation... your first act is to accuse us of tainting you with scrapcode? Of... what? Of being so careless in our data hygiene we have infected your precious datasystem with some outworld code-pox?'

Lorgar gestures to the frozen light ghosts around them.

'How much humiliation do you intend to heap upon these men? They want only to please you. To earn the respect of the great Roboute Guilliman, a respect they have been lacking these last decades. It matters what you think of them.'

'They've come to prove themselves! To show they are worthy to fight alongside the majestic Ultramarines! The warrior-kings of Ultramar! This conjunction, this campaign, it's a point of the highest honour! It matters to them! It matters very much! They have waited years for this honour to be restored!'

'I meant no insult.'

'None at all. Brother Lorgar Aurelian, why else would I have communicated informally? If I'd saved this matter to sully our ceremonial greeting, then you might have considered it an insult. A private word, between trusted commanders. That's all this is. You know scrapcode can develop anywhere, and adhere to the most carefully maintained systems. This could be us, this could be you, it could be an error from our datastacks, it could be some xeno code that's been stuck to your systems like a barnacle since you left the outworlds. There's no blame. We just need to acknowledge the problem and work together to cleanse it.'

Lorgar stares at him. Guilliman notes just how thoroughly his brother's flesh is covered with inked words.

'This was not meant to spoil our long-overdue reunion,' Guilliman says. 'This was my attempt to stop the reunion being spoiled.'

Lorgar nods. He purses his lips, then flashes a smile.

He nods again, the smile flickering in and out. He raises a palm to his mouth. Laughs.

'I see. Then very well. I should not have spoken that way.'

'I should have been more circumspect,' replies Guilliman. 'I can see how it might have seemed.'

'We'll check our systems,' says Lorgar. His smile is back. He nods once more, as if convincing himself.

'I should have been more circumspect,' Guilliman insists.

'No, you're right. There is clearly a tension here that needs to be overcome. An expectation.' Lorgar looks at him.

'I'll get to it. We'll see if we can trace the code. And then we will meet, brother. In just a few hours now, we will meet, and everything will be put right.'

'I look forward to it,' says Guilliman. 'We will stand side-by-side, we will take down this ork threat that our brother Warmaster has identified, and then history will be rewritten between us.'

'It will be so, brother. If I had not believed that the unfortunate rift between our Legions could not be healed by good society and the companionship of shared martial effort, I would not have agreed to this. We will be the best of allies, Lorgar. You and I, and our mighty Legions. Horus will be pleased, and the Emperor - our father - will smile, and old slights will be forgotten.'